Location Scouting in “Rich and Strange”

Synopsis: A bored suburban married couple, Fred and Emily Hill are fed up with their lives and with one another. They unexpectedly receive an advance against their future inheritance from a rich uncle and decide to go on a cruise to the “Far East”. As they cruise the Mediterranean, Fred succumbs to sea-sickness and is confined to his bed. Emily then begins a relationship with a Commander Gordon, a wealthy and popular bachelor. Once Fred is well again, he is smitten with a phony German “princess” who later cheats him of his fortune. Both Fred and Emily begin spending time on board with their new-found partners and have plans to dissolve their marriage. Eventually they are reunited when their ship is wrecked and they are rescued by boatmen in a Chinese junk. They finally return home, wiser from the experience, but in no time begin their bickering at each other again.

Admittedly, I am watching this early work by Alfred Hitchcock because I have read somewhere that the protagonists of the film are going on a cruise around the world, visiting places such as Paris, Colombo and Singapore. It can be said that “Singapore” is my MacGuffin in this film. And true enough, the film offers three “customary” shots of Singapore, on location in early 1930s — Boat Quay, Victoria Memorial Hall and what-was-probably Chinatown. I wonder if Alfred Hitchcock was in Singapore to film these scenes (he was a distinguished guest of the Raffles Hotel) or merely acquired the footage from other travelogue filmmakers. 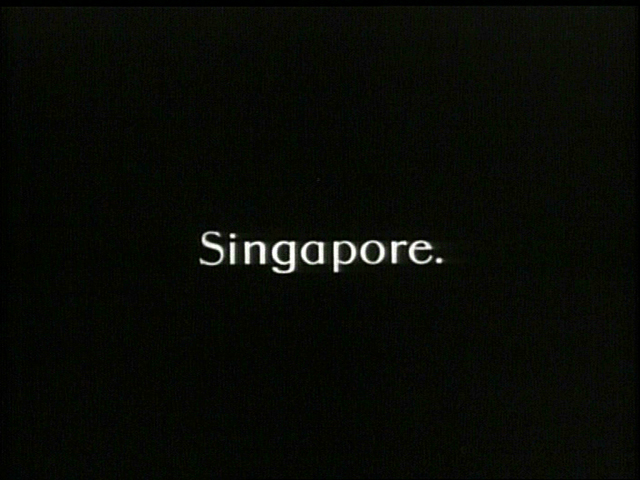 This inter-title from the film announces the cruise ship’s arrival in Singapore, the final stop on the cruise ship’s journey to the Far East. This is also where Fred and Emily go on their separate ways — Emily with Gordon the suave commander to his home, and Fred to the local hotel suite with the phony princess.

A view of Singapore River and the south bank of Boat Quay from the Cavenagh Bridge.

The clock tower of the Victoria Memorial Hall. Probably the most iconic building (and image) of the Singapore urban landscape in early 20th century.

I am not able to pinpoint the exact location of this, but I reckon it’s one of the shophouse streets in Chinatown.

Emily and Gordon are in a car that travels down a shophouse street in Singapore. The car will make U-turn here as Emily has second thoughts about going any further in her affair with Gordon.

This scene from the film is most definitely shot in the studio. But how can one turn a studio set-up into one that resembles Singapore town? In this scene’s case, the filmmakers’ added chinese characters on the shopfronts and signboards (assuming this is depicting Chinatown), and most distinctively, the traffic marshal with “rattan wings”.